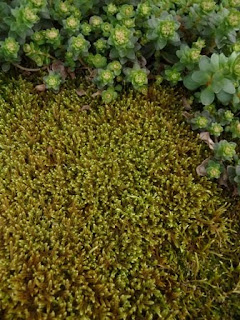 I am able to grow many different species of mosses in my moss gardens. I have also established moss gardens at two public gardens, in , and in .

If you are interested in growing moss for whatever reason then this is a synopsis of how I do it.

I use an artificial mat system of three different materials. These materials are not visible once the moss is established.

The first layer is thin plastic sheeting, 5 ml thick for example. It can be either clear or black. The plastic is placed on the ground.

The second layer is spun polyester or polypropylene material commonly called synthetic felt or craft felt and is sold in cloth or material stores.

Moss is placed on top of the felt. The felt acts as a sponge and stores water for the moss and the thin plastic sheeting prevents the soil from wicking the moisture away.

The third layer is black colored tulle, fine not coarse mesh with a matte finish. Tulle is pronounced “tool”. The tulle is almost invisible when it is on top of the moss. As the moss grows, the tulle disappears into the moss. Despite the small mesh size, the o in this sentence is the size of the tulle mesh, even Polytrichum commune will grow up through tulle. The tulle keeps weed seeds from getting into the moss garden and prevents birds from tearing up the moss garden in search of nesting material or invertebrates.

Many genera such as Thuidium, Hypnum, Rhodobryum and Bryoandersonia for example will grow directly on the felt. Some species of mosses like Dicranum scoparium and Leucobryum glaucum do require a thin 1 cm layer of hardwood mulch placed under the moss and on top of the felt.

The three layer moss mat system should be contoured to gently drain water away from the mat and not allow water to pool.

Thallose liverworts and Sphagnum species can also be grown on the artificial mat but require additional procedures to prevent desiccation.

Moss can serve as a wonderful green ground cover. Vascular plants can be planted in the moss garden by cutting an X in the three layers and directly planting the flower, bush or fern in the exposed soil.

I do not water my moss gardens but if you do, use only rainwater or distilled. Other water sources such as ground water, well water or surface waters, i.e. lakes, ponds or river waters are unacceptable and will all fail eventually because of pH, alkalinity, hardness and dissolved salts. Watering is generally unnecessary and often counterproductive, particularly when growing moss on an artificial mat system.

My goal is to encourage the use of moss as a ground cover in shady areas of our gardens and landscapes. Any botanic garden, arboretum or nature center that wishes free assistance in establishing a moss garden can contact me or visit the website.

National and state parks are off limits to collecting moss. I ask landowners for permission to collect. Most yards have shady areas where moss can be found.

Currently I am doing a lot of work on propagation techniques.

The primary commercial source of live mosses in the is Moss Acres in . Their website is www.mossacres.com. Al Benner and his father Dave are to be commended for encouraging moss gardening in the .

I have written a handbook, New Methods in Moss Gardening, which is based on moss gardening workshops I have given over the years. As a former potable supply water chemist with a B. A. in Biology and lengthy horticultural experience I have spent years growing many species of mosses and developing this simple inexpensive low maintenance method of moss gardening. This approach is explained in much more detail in the handbook. The handbook is available to IAB and Bryonet users for $11 plus shipping and handling at this link:

You can visit my website www.newmossgardening.com for more information.

Note: Picture used for cover of handbook is Hypnum imponens growing under Sedum.