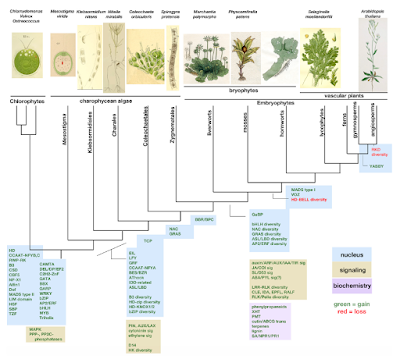 This new paper presents the first analysis of the Marchantia genome, which is much reduced compared with flowering plants, thus simplifying the process to study the function of transcription and signaling factors.

The Marchantia genome sequencing initiative was led by Dr. John Bowman, Dr. Takayuki Kohchi, Dr. Kimitsune Ishizaki and Dr. Katsuyuki T. Yamato.  Collaboration was officially extended to many other labs around the world in occasion of the Marchantia Workshop in 2014. Analyses of the genome in Marchantia were undertaken to provide knowledge of transcriptional networks that enabled the acquisition of new developmental and physiological traits that led to the colonization of land (Berger et al.2016. Current Biology 26, R181–R191).

Marchantia and related liverworts have been used as a model in biology since the 19th century and were instrumental in the discovery of heterochromatin, plant sex chromosomes, and more. Now, Marchantia is emerging as an experimental model organism for comparative developmental biology, molecular genetics, and functional genomics.

En excelent note on the paper is here:

Posted on line by Efrain De Luna
Email ThisBlogThis!Share to TwitterShare to FacebookShare to Pinterest