Here is a "cut and paste" of a portion of the paper (which I would glady send the PDF on request):

(1) Gradists (type: Huxley 1940). Those who assume that ancestor-descendant relationships can be inferred from nodes on phylogenetic trees are most likely gradists. In addition to monophyletic groups, gradists would consider paraphyletic groups to be natural and discoverable, and at times designated as ancestors (Mayr 1942). Gradists are inspired by the works of George Gaylord Simpson and Ernst Mayr. We also include herein numerical taxonomists or pheneticists (Sokal and Sneath 1963), those who prefer similarity measurements and statistical procedures (e.g. Bayesian analysis, Maximum Likelihood, etc.), and those who belong to the ‘‘It doesn’t really matter’’ school of classification (Felsenstein 2003). A is here interpreted as the gestalt (an Owenian ancestor), which is part of the genealogy of B and C. Relationship is here interpreted as a direct transformation between taxa: A ? B ? C.


(2) Numerical Cladists (type: Farris 1983). Those who support the recognition of monophyletic groups through synapomorphies and optimization (transformation series) (sensu Farris 1983), and discard non-monophyletic groups from classification. Monophyletic groups in this sense would include the most recent common ancestor (Kitching et al. 1998, p. 210). Numerical cladists are Hennigian and take inspiration from Hennig’s work, as well as from the work of other numerical cladists such as James S. Farris, Walter Fitchand Herb Wagner. A is interpreted as the gestalt (a taxon containing plesiomorphy a) which is similar to B and C. Relationship is interpreted as a transformation of parts within a hierarchy of similar gestalten, e.g. a ? b ? c within (A(BC)).


3) Pattern Cladists (type: Naef 1919). Also known as Cladists with a capital C (Williams and Ebach 2006). Ronald Brady was the first to openly defend pattern cladistics (Brady 1982). Opponents were miffed at the newly adopted ‘term of endearment’, and instead used ‘‘transformed cladistics’’ in order to refer to a break within cladists (sensu Scott-Ram 1990). Pattern cladists are not Hennigian and therefore they do not form a split in or from the numerical cladists group. Their rejection of optimized transformation (transformation series) at the level of character-states is sometimes misunderstood as a rejection of transformation wholesale. Concepts such as character rooting and synapomorphies, greatly favoured by numerical cladists, are not used by pattern cladists. Pattern cladists favour the work of Gareth Nelson and earlier German-speaking systematic morphologists Adolf Naef, Joseph Ka¨lin and Rainer Zangerl, going all the way back to Johann Wolfgang von Goethe. The taxa A, B and C are separate gestalten (an observation of an individual at any given moment), which are manifestations of the same taxon (i.e. monophyletic group). Relationship is an observed process involving active participation of the mind or Anschauung—A(BC).


(4) Transformed Cladists (type: Patterson 1982). Unlike pattern cladists, transformed cladists are Hennigian and root their trees according to either outgroups, ontogeny or concepts such as set theory. Transformed cladists also reject the concept of optimisation as it forms partitions and not hierarchies with sets. They opt for a definition of monophyly that does not include the most recent ancestor. They do not reject totally transformation, but they do use a concept of character rooting that is inherent within set theory. The works of Colin Patterson (1982) and Platnick (1979) have inspired transformed cladists. A is interpreted as the gestalt (plesiomorphy containing a) which is similar to B and C. Relationship is interpreted as an inclusive set of parts that is a hierarchy of similar gestalten —(A(BC)).


And here is the cladogram: 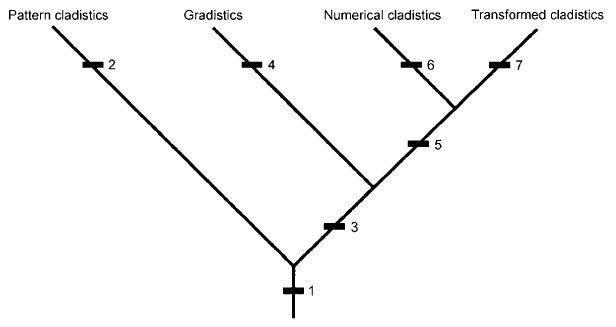